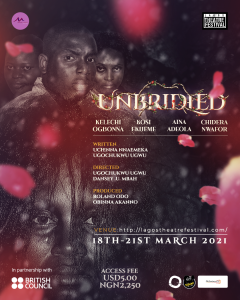 Unbridled.
Things that are seen are most times controlled by forces that are not seen.
Damian and Lilian are victims of a fate they can’t control.
The play x rays family life in Nigeria, with all the struggles and web of difference that money or the lack
of it can make.
The family also influences the making or destruction of a marriage.
Cast: Aina Adeola. Kosi Ejikeme. Kelechi Ogbonna. Nwafor Chidera.
Crew:
Director: Ugochukwu Ugwu
Assistant Director: Dansey U. MBA
Technical Directors: Richard Umezinwa. Emmanuel Ogbonna.
Props: Freshman Tamaraukekeme
Set: Emmanuel Ogbonna
Light: Ujunwa Nwokolo.
Production Supervision: Obiora Ekwueme. Richard Umezinwa.
Stage Manager: Thelma Alum

Director’s Profile.
Ugochukwu Victor has a Master’s and Bachelors degrees in Theatre and Film Studies from the
prestigious the University of Nigeria. In 2016, shortly after my graduation, I founded Maestro Theatre; a
theatre troupe based in Southeastern, Nigeria. Maestro Theatre uses dance, drama, and social
commentary to tell compelling stories, with full knowledge that theatre is a socially sensitive endeavor
that must be influenced in the direction of all useful movements in the society. Ugochukwu has a keen
interest in using theatre for entertainment as well as enlightenment.

Producer’s Profile.
Roland Ozoemena Odo is an astute Theatre/Cultural Administrator with vast experience in theatre and
general production management. He has managed Maestro Theatre; a fast-growing theatre company in
the Southeast, Nigeria since its inception. With a Master’s degree in Theatre and Cultural
Administration, he has successfully produced plays in major Nigerian cities like Enugu, Lagos, Abuja and
Owerri.
Roland is an ardent believer that, theatre must be used to enhance safer and more positive space where
young people come together to interact while sharing their struggles with each other.