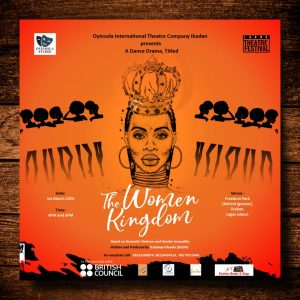 The Women Kingdom is a Dance Performance that vividly tells of the ordeals of women in the hand of abusive men and a patriarchal world. Set in the allegorical land of Abeyinto, the story opens with an idyllic scene of courtship between young men and women. While some couples could not make it work, some fell in love with each other.Subsequently the romance blossoms into marriage.
Under the institution of marriage, the woman goes through a lot; her incessant efforts to please her husband are met with the reward of violence. She cooks for him but he is not satisfied. She labors to birth a child and there is celebration but it turns sour when the father finds that the baby is a girl. Unsatisfied with her gender, the father gives the child to a stranger without any care for whatever happens to her. To him, she is worthless.
After a business transaction,a woman refused a man’s amorous proposal. The woman is raped by the man with the help of his “agbada” donning friends. Another is denied a well deserved political title because she is a woman.
At the climax of these atrocities, a war ensues between the two genders and women become victorious. With the upper hand now, the women question the men and demand restitution.