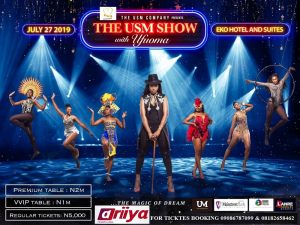 The USM show can be likened to a cabaret styled show with a musical as the main attraction. A cabaret is a form of theatrical entertainment featuring music, song, dance, recitation, or drama. It is mainly distinguished by the performance venue, which in this case is a prestigious stage at Eko hotel and suites.

Performances are usually introduced by a master of ceremonies. The entertainment is done by an ensemble of actors. Inspired by the likes of Moulin Rouge, The Greatest Showman, Circle du Soleil and Broadway shows, the glamorous event is principally driven by a musical dance drama live on stage, divided into 4 acts. Between each act, our guests are further entertained in Music, comedy and dance as interludes and the event is wrapped up by our A list closing act. The maiden edition of the show is titled  “The Magic Of Dream’.T he aim is to entirely and wholly entertain guests at a live show using all forms of spectacle and showmanship in about 3 hours of tight and heart racing performances.