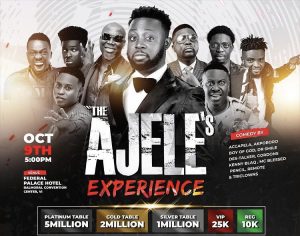 The Ajele`s Experience (TAE) aims at an eminent comedy entertainment impact by knitting two sectors of the event industry in one night with hilarious strokes of serendipity interspersed with dignitaries and celebrities extemporaneous performances. In the value chain of TAE show ,top-notch PR and massive publicity campaign would be employed, this will intern enhance supporting brands projection and equity.

In one Night ,The Ajele Experience is bringing together comedy and event show to birth the highest and best entertainment experience. While a typical comedy show will offer hilarious moments laced with outburst of laughter and finger foods, a ceremonial event proffers the best co-ordinations, glamour, music and party arrangement; The Ajele`s Experience would create a memorable night, full of laughter, good music, food and drinks, great performances – a top notch party and comedy show experience.