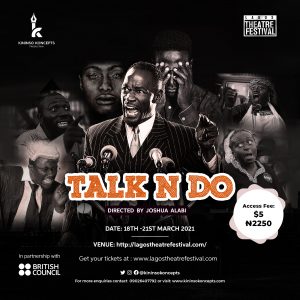 In a country like ours with little or no respect for the rule of law and where sometimes the laws that govern the state when it comes to issues of criminal justice and anticorruption seemingly favors the corrupt while the uncorrupted bears the brunt for trying to stay true, following due process. Citizens on the other hand stand and watch their rights trampled upon on a daily basis, but would rather not speak for the fear of victimization while persons with disabilities are left in a world of their own. TALK ‘N’ DO is a socio-political musical theatre piece that discusses the role of citizens in the bid to strengthen anti-corruption laws in the country. Driven by music, dance, drama, poetry, and pictures, this captivating performance discusses issues around sexual and gender-based violence, child right, vulnerable and people with disability proffering solution and where to receive help.

ABOUT THE PRODUCTION COMPANY
Kininso Koncepts Productions is a professional young people’s art, theatre/Entertainment Company, an itinerant performing group that uses art to communicate to people and the world at large. Through deep research findings into our culture, tradition, and values, we create performances with the sole aim of making a statement of relevance towards innovating a creatively different performance style and story-telling technique that will not only entertain, inform and educate but challenge our audience, ourselves as human towards nation-building and the need for intellectual, physical, social and cultural development. Through the means of dance, drama, music, movement, poetry, and nature, we create stories, infuse unusual elements blending with groundbreaking as well as mentally/physically energetic performance using our body as the tool for conveying messages with a strong sense of creativity and aesthetics integration. Kininso Koncepts is an embodiment of young stars in art determined to neglect the nature of the streets, using the art to self-empower and project the strength of Africa’s richness in culture.

ABOUT THE DIRECTOR OF THE PLAY
Joshua Alabi the CEO of Kininso Koncepts Production is a Creative strategist, Ideas and content developer, storyteller, trainer, and Consultant. A member of International Associations/Networks. His passion for creativity and storytelling matches his strategic thinking, ideation, leadership, influencer, activator, and learner abilities as he has led outstanding local and international projects and brands across Africa and Europe. He has gained over 12 years of experience within the industry and a B.A and M.A (Theatre Arts) holder from the University Of Lagos, Department Of Creative Arts. He has supported talents, trained and empowered a large number of creative and young people within the creative industry and another sector.