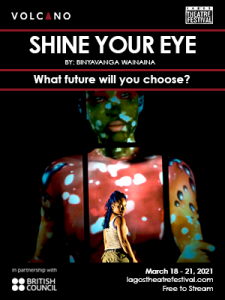 SHINE YOUR EYE
A young Ogoni hacker in Lagos is caught between two possible futures – one Nigerian, one North American. In this Canadian world premiere of his only play, literary giant Binyavanga Wainaina looked ahead to how a young African could imagine a path toward a future she actually wants

DIRECTOR’S PROFILE:
Ross Manson is an actor, director, and translator, and the founding Artistic Director of Volcano (“The explosive company from Canada” – The Independent, UK). Volcano specializes in projects that explore compelling social and artistic territories in innovative ways, often inventing multi-disciplinary styles of performance or development tailor-made to the idea at hand. Ross has directed across Canada and around the world – for Tarragon; Canadian Stage; Svenska Theatre, Helsinki; Third Wall, Ottawa; Canada Dance Festival, among others. His over 20 shows for Volcano have earned over 70 award nominations or wins at the local, national and international level. These include over 43 Dora nominations over 4 divisions, 13 Dora wins, 2 Governor General Award nominations, The Carol Tambor Foundation “Best of Edinburgh” Award, a Scotsman Fringe First Award (Edinburgh), the NOW People’s Choice Award (Toronto), The Dublin International Fringe Best Design Award, a Chalmers National Play Award (Canada), the Edinburgh Total Theatre Award shortlist, among others. Ross has been nominated for many Dora Awards in directing, acting, playwriting, and producing (winning once for Outstanding Direction, once for Outstanding New Play, and twice for Best Production). He is the winner of both a Harold Award for community service, and a KM Hunter Award for excellence as an emerging theatre artist. He was a finalist for the 2009 Rita Davies and Margo Bindhardt Cultural Leadership Award in Toronto, the 2009 Premier’s Award for Excellence in the Arts in Ontario, and the 2010 and 2016 Siminovitch National Prize in Directing.

PRODUCTION COMPANY:
Volcano is a Toronto-based live performance creation company. We work experimentally, collaboratively, and with an eye to making art that is culturally aware and politically engaged.
We seek to transcend borders, boundaries, orthodoxies.
We value art that impacts its audience in a profound way. We value art as a force for deepening thought and healing souls.
We value the people we work with for their imaginations, their excellence in craft, and for all the experiences, vantage points and histories they bring with them. We value the creation of space where art-makers feel free to bring themselves fully to their art-making. We value collective effort.
We value well-being in our work, in our communities, in our societies.
We value a better future.

Volcano engages professional artists who are members of Canadian Actors’ Equity Association under the terms of the Independent Theatre Agreement.

Volcano is an affiliate member of the Professional Association of Canadian Theatres (PACT) and a member of the Toronto Alliance for the Performing Arts (TAPA).

Kenneth Binyavanga Wainaina was a renowned Kenyan author, journalist and playwright, who became one of the most influential voices in African literature in the early part of the 21st century. His essays include the iconic “How to Write About Africa” for Granta magazine – which became the most widely republished piece in Granta’s history. His short story “Discovering Home” won the prestigious Caine Prize for African Literature in 2002. He was given a special award by the Kenya Publisher’s Association in 2003, in recognition of his services to Kenyan literature. He was the founder of Kwani? (meaning “so what?”), a literary journal in Kenya that was to become Africa’s leading creative writing journal, and spur the careers of some of the most important young writers in the continent. The World Economic Forum recognised him as a Young Global Leader in 2007, an award he turned down, saying: “… although, like many, I go to sleep at night fantasising about fame, fortune and credibility, the thing that is most valuable in my trade is to try, all the time, to keep myself loose, independent and creative… it would be an act of great fraudulence for me to accept the trite idea that I am ‘going to significantly impact world affairs.” Nonetheless, in 2014, Time Magazine named him one of the 100 most influential people in the world.

Binyavanga’s copious essays and acclaimed short fiction appeared in The East African, Mail and Guardian (South Africa), Chimurenga, National Geographic, the Sunday Times (South Africa), Granta, the New York Times, Vanity Fair, Adbusters, Harper’s Magazine, The Guardian (UK) and many more. He taught at Union College and Williams College, and went on to become the Director of the Chinua Achebe Center for African Literature and Languages at Bard College. He split his time mostly between these colleges in the USA and his hometown, Nairobi – although he traveled frequently, and spent much time in South Africa both as a student, and later in life.

Binyavanga was approached by Volcano Artistic Director Ross Manson in New York in 2007 for advice in sourcing an African playwright to become part of an international team examining the relationship between Africa and the West through a trilogy of plays. Already famous, Ross didn’t consider Binyavanga a remote possibility to write for this – but Binya put himself forward at the end of a two-hour coffee meeting at a mid-town diner – curious about the possibilities of theatre. The result was Shine Your Eye – his only play.

Binyavanga’s meteoric literary career was cut short at the age of 48 by repeated strokes. He was to submit his manuscript for a gorgeously experimental memoir, “One Day I Will Write About This Place” in 2011, weeks before his first stroke. It was to be his only full-length book. He attracted international attention as one of the most prominent Gay rights activists in Africa by adding a “lost chapter” to this memoir in 2014 – “I am a Homosexual, Mum” – a nuanced and heartbreaking piece in which he very publicly came out, after his parents’ deaths, against a backdrop of increasing anti-gay laws and state-sponsored homophobia – especially in his native Kenya. As one of the most prominent champions of Africa on the world stage, this coming-out generated a firestorm of debate about what was a taboo subject. His friend and contemporary Chimamanda Ngozi Adichie wrote of this act: “Binyavanga has demystified and humanized homosexuality and begun a necessary conversation that can no longer be about the ‘faceless other.’ ”

Ellah Wakatama Allfrey, chairperson for the Caine prize, wrote that “Binyavanga was unbound in his imagining — reminding us with art and characteristic playfulness, what English can look like when it’s an African language.”

Author Joyce Nyairo said of Binyavanga after his death in 2019: “Binya leaves an indelible footprint in the sands of that surge of creativity and production that defined Kenya in the new millennium… What immense talent; what an enormous personality.”