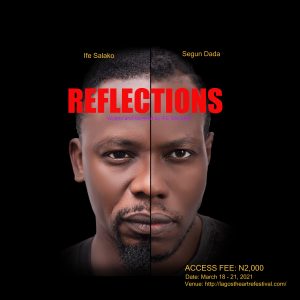 Written and directed by Ife Salako, REFLECTIONS is a satirical comedy of the Nigerian state amidst thought provoking discuss around mental health, suicide, relationship, domestic violence etc fused with humour. The play situated in Lagos, Nigeria features Tade and Dibia, two young and expectant men excitedly sharing their story as they journeyed through life. However their dark flame soon became a need for some reflection. It’s a must watch.

Adeshine Theatrical Koncepts is a social reformation organisation, focused on driving a positive change of identified social ills. The company incorporated in May 2013, has a strategic Focus to create extra-ordinary theatrical experiences, to project the theatre as a means of entertaining, educating, challenging and inspiring individuals, institutions and the community through innovative stage works. We are professionals in the fields of Public Speaking, events compere and Acting, our display of theatrical acts during our performances influences our messages and leaves an extensive positive impact on our audiences. We aim only to impact and impart to the audience. ‘REFLECTIONs’ is our third production at The Lagos theatre festival.

Ife Salako is a fearless writer who chooses to explore some of the most daring situations and topics writers avoid. He was an undergraduate when he wrote Reflections. He has written several screen plays afterwards and another stage play titled Bride’s Pride (Rubiewe). He is presently an On Air Personality on Naija FM 102.7 (Ifektive) and a Filmmaker.

Babatunde Adegbindin (Adeshine) is a social entrepreneur, a public speaker, an events compere, a stage play producer and an investment banker with a focus on Islamic Finance. He started stage play productions with ‘Fool’s Day’ written by Femi Oke and ‘Childe International”, written by Prof Wole Soyinka, for the annual conference for Society of Petroleum Engineers in 2016 and 2017. Today he has produced over 50 stage play productions, after working with and learning from one of Nigeria’s best dramaturge Wole Oguntokun. Adeshine has directed and produced several stage plays for organisations and brands like The book club Lagos for their Living through the leaves literary project, Society for Petroleum Engineers, Crescent Schools, Al Furqaan International School, Eagle Toastmaster Club… to mention a few.