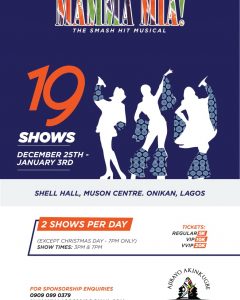 Mamma Mia’ is the romantic comedy musical about youth, love, freedom, friendship, tolerance, music and celebration. The jukebox (sing-along) musical is based on the songs of the hugely successful 70s & 80s Swedish pop group, ABBA. While Abba’s music is reminiscent of a particular generation, the power of ABBA’s music transcends time, into a space where all generations congregate, in a manner that other bands cannot boast. It was this popularity which inspired the birth of the stage musical, fittingly named after their 1975 chart topper – ‘Mamma Mia’.

Here are some facts about this exciting family musical, that’s sure to whet your appetite:

Grossed 4 billion USD at the box-office

The success of the stage production was followed up by a ‘Mamma Mia – The Movie’ in 2008, which grossed $615M USD at the box office, with the sequel (Mamma Mia, Here We Go Again) in 2018, also fetching a whopping $395M USD as well as critical applause.