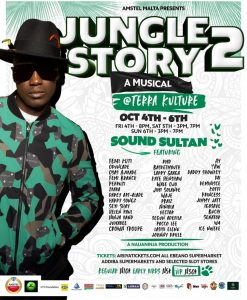 Holding at Terra Kulture, Victoria Island, Lagos, Jungle Story will run for three days (October 4th, 5th and 6th 2019) and will feature a long list of Nigerian entertainers alongside Sound Sultan, who is marking his 19th anniversary as a professional musician.

“The story is about a land that became a jungle because the motherland cast a spell on its people that who so ever indulged in corruption would be transformed into animals and over the years one transformation after the other it became a full-fledged JUNGLE,” he said.

Regular tickets will be sold for N10,000 at the gate while early bird tickets are on sale on Ariiyatickets.com at N5,000. VIP tickets cost N30,000.