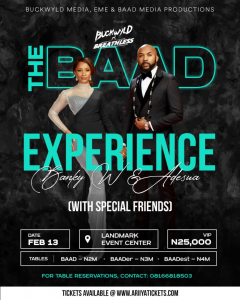 Nigerian’s top celebrity couple Olubankole Wellington aka Banky W and Adesua Etomi Wellington alongside other celebrity guests will be live at the St. Valentine’s Day edition of Nigeria’s premiere scripted concert, Buckwyld ‘n’ Breathless tagged #TheBAADExperience. The event will be held at the prestigious Landmark Event Centre, Oniru on Sunday, February 13, 2022, with the Red carpet opening at 7PM prompt.

The couple have taken to social media to wet the appetite of their fans about the event with a teaser video ad captioned, “Got any plans for Valentine’s? Join us for date night on February 13th, 2022”.

The event promises to be a worthwhile experience filled with a lot of music infused with theatrical performances, romance and drama. Fans on social media have shared their excitement toward the event and are already making plans to purchase tickets to attend.

Buckwyld ‘n’ Breathless is an event property of Buckwyld Media and is the nation’s most consistent fully scripted production that features deft use of props, elaborate costume,audio-visual content, special effects and a large support cast to deliver an exhilarating concert experience. The concert has been headlined by some of the biggest stars in the music industry like 2Baba,Tiwa Savage, Flavour, Falz, Flavour and MI as well as Sauti Sol in Nairobi (2016).

This year’s event is organised by Buckwyld Media in partnership with EME and BAAD Productions.