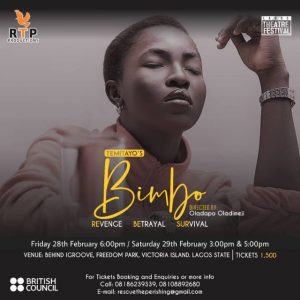 Bimbo is a story of a Lady who escape death when her father was killed by some hired assassin but was kidnapped by another. Who later spare her life after collecting money to kill her. He fell in love with her and spare her to live in another state. Bimbo is seeking for the revenge of her father,yet the killer who spare her promise her to help her get justice. Out of desperation bimbo take a step that leak the secret of her existence which cost her the life of who love her and spare her.